The 17 Most Romantic Places to Propose in London

By Anna Lao-Kaim 2 June 2020 0
Saved Save
If you’re seeking the perfect place to pop the question in the capital, look no further… If you’re planning to propose in London you’re clearly onto something. It was voted the one of the world’s most romantic cities, second only to Paris, bien sûr.

Whether you’re a born and bred Londoner, living in the city, plotting a romantic weekender or just in town for the day, London offers up countless unique landmarks and hidden corners that provide the perfect backdrop to all manner of proposals.

From serene gardens to flower-filled markets and swanky rooftop spots, here’s all of the best places to propose in London. Good luck!

If the idea of a romantic station proposal makes you want to grab your suitcase and jump straight into a 1920s movie scene, the gothic glamour of St Pancras will provide the perfect setting in which to get down on one knee. Propose right next to The Meeting Place statue of a couple kissing for even more poignant romance points before celebrating at Searcys Champagne Bar on the Grand Terrace within the station. Feeling really extravagant? Hop on the Eurostar to Paris afterwards.

Happy #BookLoversDay with our favourite #shelfie! No matter how many times we look at the King's Library, we never tire of this view. ⠀⠀⠀⠀⠀⠀⠀⠀⠀ What's everyone reading today? ????

If you prefer to keep romantic declarations a little more low key, next door to St Pancras you’ll find The British Library, aka, every bibliophile’s calm, quiet, book-filled dream. Pop the question in the presence of your partner’s favourite author or just pick a hidden nook by a quiet shelf in which to do the asking. Just don’t make too much noise about it – silence is not just golden here, but a regulation. Did we mention that champagne bar next door?

3. The Kyoto Garden at Holland Park

As serene as any library, Holland Park’s Kyoto Garden is guarded by peacocks and has stood as a place of contemplation and tranquillity since it was gifted to the UK by the city of Kyoto in 1991. With traditional Japanese landscaping, waterfalls, maple trees and ponds teeming with koi carp, it makes for one of London’s most peaceful places to propose.

READ MORE: This Is How Much You Should Spend On An Engagement Ring

Happy sunny Easter everyone! ????☀️ Hope you have a lovely day (and eat loads of chocolate!) ???? Photo by @windmilldreams #happyeaster #columbiaroadflowermarket #prettylittlelondon

Equally floral but a little more energetic, Columbia Road Flower Market in the East End comes to life every Sunday, showcasing flowers, plants and trees from all over the world with little delis and galleries dotted in between the stalls. The market provides a ready-made flower wall for post-proposal ring shots and you can pick up a glorious bouquet to take home after the morning’s excitement.

It may have a flowery moniker but it’s the city panoramas and candy-coloured homes that make this Regent’s Park beauty spot such a winner for popping the question. Come at dawn or sundown to make those vistas even more breathtaking.

6. The Royal Observatory in Greenwich

This UNESCO World Heritage site makes for a starry proposal – you could get down on one knee in the planetarium, on the Meridian Line that divides the east and west hemispheres, on the Cutty Sark or simply in the historic grounds of the National Maritime Museum. If all goes to plan you could even book your wedding there afterwards – the Queen’s House is home to world-famous artworks, a painted gold leaf ceiling and a tulip staircase that’s crying out to be featured in wedding shots.

READ MORE: 13 Things That Every Newly Engaged Couple Should Do

7. The Serpentine in Hyde Park

Push the boat out in a very literal sense by proposing while rowing or on a pedalo on the Serpentine. The latter option is admittedly riskier – hold on tight to the ring. Plan a picnic in Hyde Park when you’re back on dry land to toast your newly engaged status.

From The Electric on Portobello Road to the waiter-serviced Everyman in Hampstead and cushy Screen on the Green in Angel, there’s a luxe cinema in most corners of London providing a more sophisticated proposal backdrop than your average big screen. Pick a film you know your partner will love, let the staff know and then sit back to enjoy bubbles and a sharing platter served straight to your seats (or velvet sofa in some cases). Keeping schtum during the film could prove challenging though… If you can’t make it that far, get your proposal written on the outside of the building, like you can at The Ritzy in Brixton?

Incredible and fantastic performance from the unique Salif Keita and his wonderful band! ????????????. What a show we had the chance to see last Sunday. West African and world music at its finest. Brilliant. ???? @transientlife.uk #african #world #live #music #ronniescotts #salifkeita #soho #london

If jazz is more up your partner’s street, locations don’t come more sexy or iconic than Ronnie Scott’s. Reserve a prime table, order a Boogie Woogie cocktail or two and pick your moment. Again, it’s probably advisable to let the staff know first to choreograph a seamless proposal, but it’s totally your call.

#PalacePhoto! Our favourite picture this week is by @adrienneclement on Instagram, of a sunny Sunken Garden at #KensingtonPalace. Does this mean spring has finally arrived? ???? #photography #spring2018 #spring #sun #blueskies #byesnow #history #sunkengarden #flowers

Harry and Meghan announced their official engagement here so you’d be following in very recent royal footsteps if you chose these elegant gardens as your proposal venue. With meadows full of wildflowers, ornately manicured gardens or the romantic Cradle Walk to choose from, it’s got variety going for it too.

READ MORE: 13 Things That Happen To Every Bride After Getting Engaged

If you crave more extensive outdoor space with plenty of wild drama, Richmond Park’s grasslands provide space in spades and no doubt at least one herd of deer looking on as you bring out a ring. Head to Pembroke Lodge tea rooms afterwards to clink teacups/ champagne flutes.

Half way between London Bridge and the Tower of London, the 12th-century St Dunstan-in-the-East was largely destroyed in the Second World War. Today, foliage cocoons the ruins while a low-lying fountain tinkles in the middle of the nave, making this church an otherworldly inner-city oasis in which to read (albeit not when raining).⁠ .⁠ Link in bio for more great places to to read around London, from inner-city hideaways to bookshop cafés serving the best fiction and flat whites.⁠ ???? @allinonediary⁠ #SUITCASEtravels⁠

St Dunstan’s Church may have been damaged in both the Great Fire of London and the Second World War, but its ruins live on in the City in the most spectacular of ways. Now a designated park, the ivy-wrapped columns and leaf-bordered windows look like they belong in a fairytale rather than London’s financial heart. If seclusion and eerie beauty appeal, head east.

From Monday 30 March, our Gardens will be open from 8am – 4.30pm. . . The Sound Garden and Garden toilets are closed. We are doing our best to keep the Gardens open and safe at this time – please help us by adhering to social distancing guidelines. . . . #HornimanMuseum #HornimanMuseumandGardens #Gardens #GrowingGardens #Sun #Spring #seasons #Blossoms #socialdistancing #bandstand #GardensofEngland #clearskies #views

A post shared by Horniman Museum and Gardens (@hornimanmuseumgardens) on Mar 27, 2020 at 9:34am PDT

Overlooking treetops and with London’s skyscrapers on the horizon, the teal-hued Horniman bandstand is striking and special without being too obvious. Go on a stroll through Forest Hill first to settle your butterflies before getting down on one knee.

Inside the Palm House ???? Did you know..? Important scientific work takes place in the here, including DNA research and finding new medicines. ???? thanks to: @netram_zurc

There’s no shortage of plant-based proposal ideas at Kew Gardens. If you like it hot, go for the indoor rainforest at the Palm House, get some fresh air and weave your way among the branches on a walkway high in the trees, or keep it trad in the rose garden. You’ve got 37 acres of woodland to play with too if you’re feeling more spontaneous.

READ MORE: 23 Ways To Start Saving For Your Wedding

Venice may be renowned for picturesque gondola proposals, but London’s Little Venice has a subtler enchantment about it. Kneel down next to a narrow boat, or better still, have a bottomless brunch on one – Darcie & May Green doubles as an Aussie restaurant and a floating art gallery. Situated on the Grand Union canal, it’s open for early morning flat whites, evening espresso martinis and smashed avo with a side of fizz in between. If ‘casual yet cool’ is part of your proposal criteria, get on board.

Soar up to the top of the Walkie Talkie to London’s highest public garden (and probably the only one where your spirits won’t be dampened if it’s raining). The light-filled Sky Garden rooftop offers up 360º skyline views, cocktails, music nights, sunrise yoga and enough space to find a hidden corner from which to ask a very big question…

Proposals don’t come more British than on a Routemaster, unless you produce a ring in a scarlet phone box or down the local boozer (which are equally viable options). Choose a scenic bus route – routes 24, 9 and 11 take in the big sights – then head to the top deck and do the asking as you sail past Big Ben or Trafalgar Square. Just go early doors or at night-time to up your chances of alone time.

Decided to pop the question? Here’s how much you should spend on an engagement ring. If you’re going to take some photos after your special moment, here’s some engagement shoot tips. 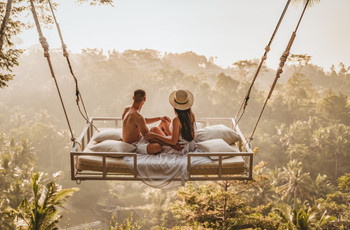 Planning Essentials The 21 Best Places to Propose in the World If you’re looking to find the perfect romantic spot to propose, we’ve done all... 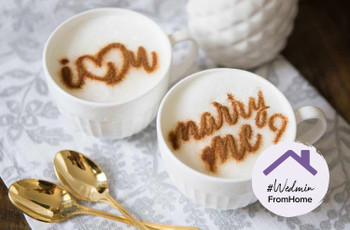 Planning Essentials 25 Ways to Propose at Home: The Most Romantic Ways to Pop... Thinking about getting down on one knee, but don’t want a public proposal? These... 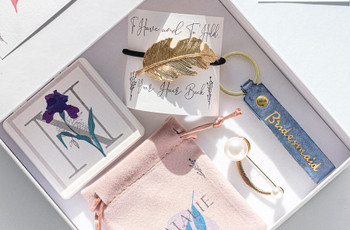 Planning Essentials 10 Bridesmaid Proposal Boxes (and How to Make Your Own) Now you've said 'yes' it's time to pop an important question of your own!... 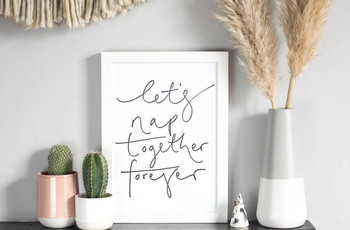 Planning Essentials Anniversary Gifts for Her: 50 Romantic Ideas Your Wife Will... Browse our edit of 50 of the best anniversary gift ideas for her - from tech...
See More Articles