By Helen Pye 15 July 2020 0
Saved Save
When Jo and Ste were desperately searching for witnesses for their secret registry office wedding, the Hitched editorial team jumped in to help - here's what happened next 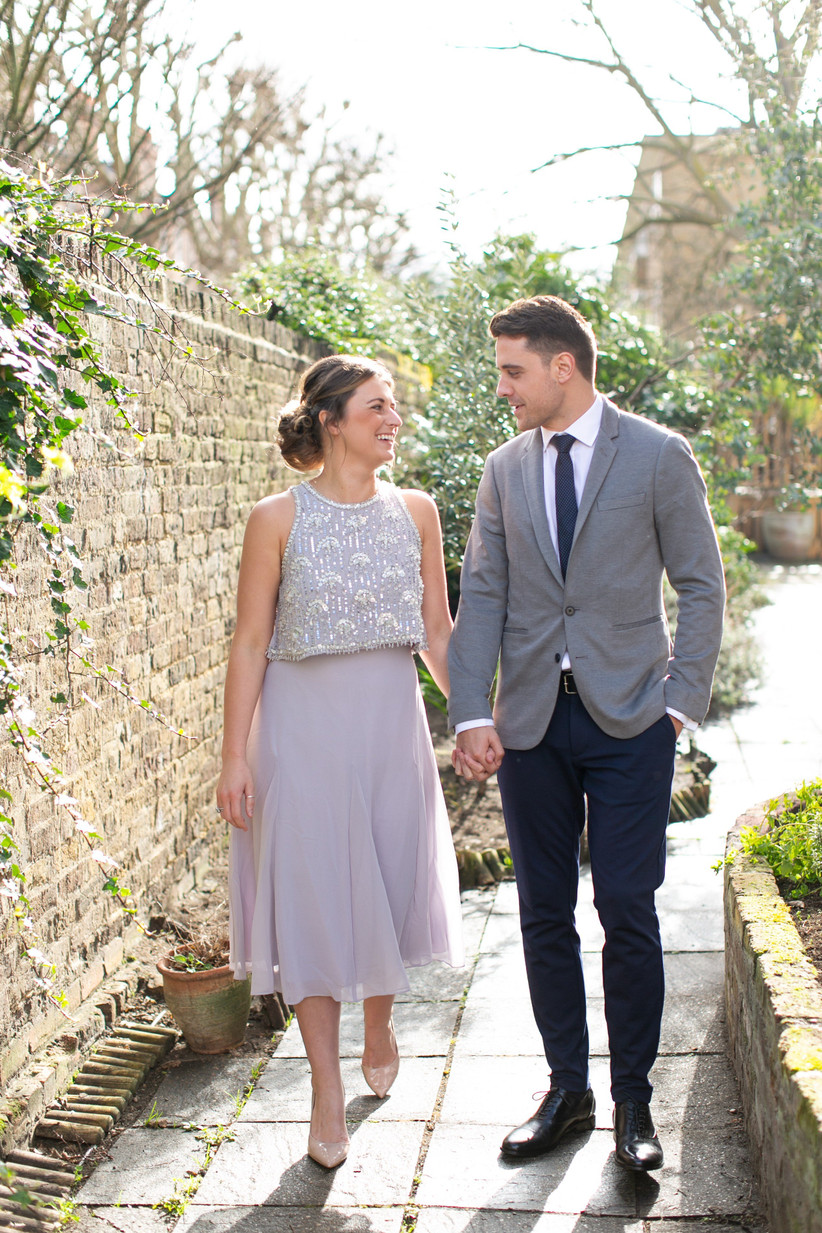 It’s undeniable that the worst parts of wedding planning are deciding the guest list, chasing RSVPs and organising the seating chart.

As much as we love our friends and family, there’s always that tiny nagging thought that it would be a heck of a lot less stressful if you didn’t have them there.

An increasing number of engaged couples are doing just that – getting married without anyone they know invited and asking complete strangers to be witnesses at their wedding.

The reasons are diverse: elopement, family politics, a secret wedding. But what is it really like to have strangers witness the most important vows you’ll ever make? Why would any couple do it? Is it awkward for the witnesses?

On a drizzly day in February, Hitched’s editorial team – myself and editor Sarah – headed to Hammersmith Town Hall to find out. Joanne Knowles and Steven Wood’s reason for marrying with strangers as their witnesses was actually incredibly uncomplicated. In April, they’d be having a big wedding in Thailand which both sides of family were flying over for, and they needed to complete the legal part beforehand.

“We found this older couple online who quoted us £180 to be our witnesses for the day and I was not paying that!” explains Jo.

“And my fiancé found a guy on Gumtree who was willing to do it for free, but he kept getting the date of the wedding wrong.

“I planned to just pull people off the street to be our witnesses, but Ste was worried that we would end up with no one – so we compromised. ”

We found this older couple online who quoted us £180 to be our witnesses for the day and I was not paying that!

The compromise Jo, 30, from Australia, and her fiancé Ste, 29, from Leeds, agreed was to put out a plea on the Hitched forum asking if anyone was free to be witnesses at their registry office wedding a month later.

“We wanted it to be our day. We didn’t want loads of people sending us messages on the day – which obviously is a really lovely gesture – but we just wanted it to just be us, so that was main driver. And then, another reason behind not having people we knew there was, if you have someone there and you don’t have someone else, that’s always going to cause conflict,” Jo explained. “Our parents still don’t know that we did it yet.” 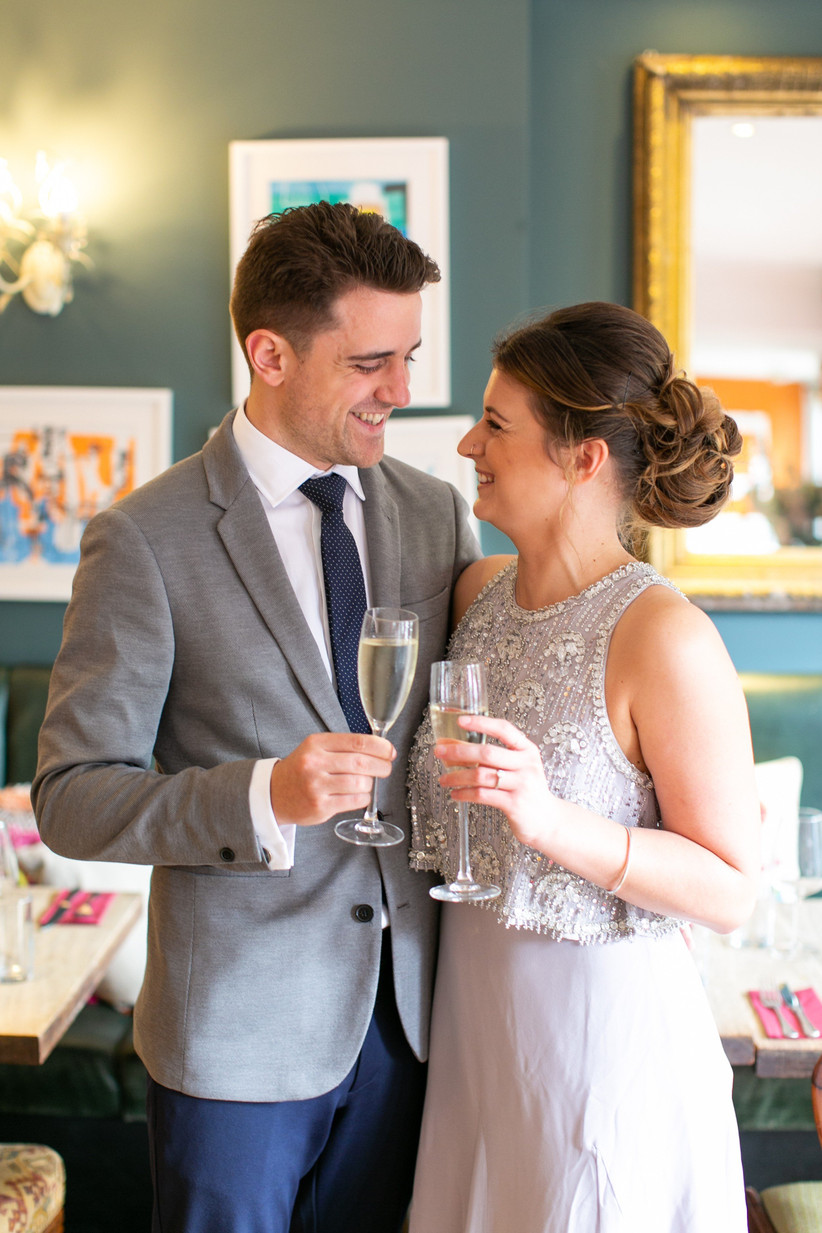 We meet them at The Hampshire Hog pub in Hammersmith an hour before their town hall slot to steady everyone’s nerves with a drink and for the obligatory getting to know each other. Jo and Ste met in her native Australia on Melbourne Cup Day 2013. “It was a Tuesday,” remembers Jo.

Tipsy after an evening watching a football match, Ste proposed – for the first time – in 2015 in their bedroom at home.

I didn't believe him so I was laughing, and then he goes, 'I think I should tell my mum.' And I'm like, 'Oh, that proposal was real?'

“I didn’t believe him so I was laughing about it with him, and then he goes, ‘I think I should tell my mum.’ And I’m like, ‘Oh, that was real?’

The second proposal – “the proposal he likes to tell people” – was in August 2018.

“We do date nights every month, and he took me to see a play, Witness For The Prosecution, and then we went to The Ivy for lunch. We were just chilling out and then he put the ring on the table. He didn’t get down on one knee like the first time, he just put it on the table,” says Jo. 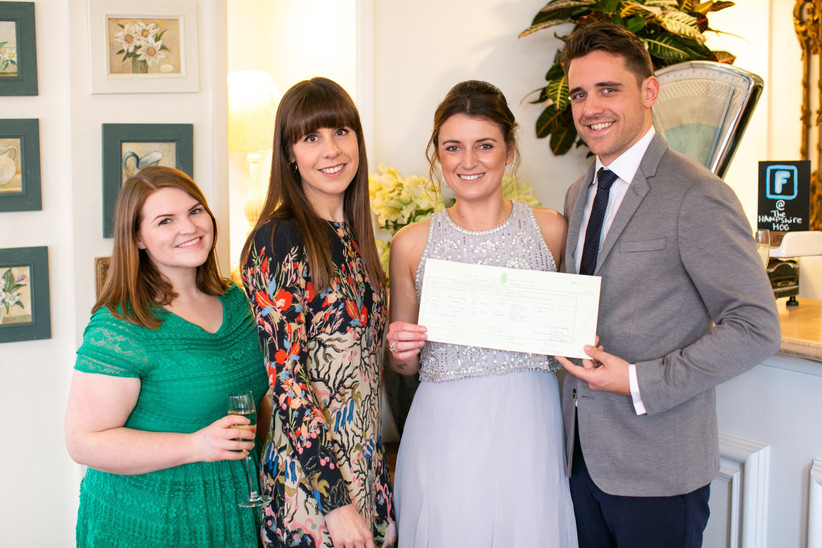 Hitched’s Helen and Sarah with the happy couple and their wedding certificate. Image: Anneli Marinovich

Jo and Ste knew what wedding they wanted. With guests coming from Australia and the UK, they’d decided to marry in the middle at the Silavadee Resort in Koh Samui, Thailand. They had actually already sent out invites eight months before Ste’s second proposal to give their guests lots of time to save up – and for Jo’s Grandma to get her first passport.

The registrar asked if we knew any reason why the couple couldn't marry and all I could think was, 'I don't even know their surnames!'

It was only a swift 20 minute ceremony in the (actually very atmospheric) registry office in Hammersmith to be pronounced man and wife. Jo and Ste went in ahead to meet the registrar before we joined them to witness the vows. I wondered if it would feel like intruding on an intimate, private moment. After all, there was an awkward moment where the registrar asked if we knew any reason why the couple couldn’t marry and all I could think was, “I don’t even know their surnames!”

Instead it felt like a huge privilege to be in the presence of two people completely in love and let in on their secret. Despite having met them only an hour before, I had a jaw-achingly big smile and tears rolling down my face as they said “I do”. Somehow it felt even more personal to witness than if they’d been my best friends.

It felt like a huge privilege to be in the presence of two people completely in love and let in on their secret. Somehow it felt even more personal to witness than if they'd been my best friends.

And then we left them to a enjoy a celebratory pub crawl along the Thames. It’s kind of surreal to have been part of one of the most memorable days of their life – and then return back to work and never see those people again. 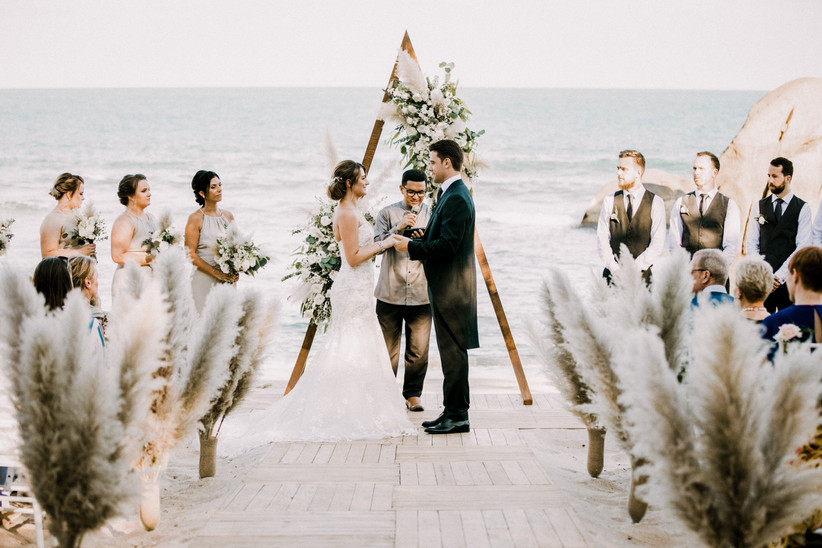 Jo and Ste jetted off in April to Koh Samui for their “real” wedding: a stunning, beachside ceremony with 54 guests; Jo in a flowing embroidered, strapless gown; Ste in charcoal grey tails; pampas grass and white roses lining the beach and bouquets.

Speaking to Jo after their Thailand wedding, I wanted to know if she was glad that they had a secret wedding first, without any of their friends or family knowing.

I would definitely recommend having your own day for the legal ceremony. It was such a good decision for us to have that, because otherwise we wouldn't have been able to experience what it actually feels like to be newly married with each other.

“I would definitely recommend having your own day for the legal ceremony. It was such a good decision for us to have that, because otherwise we wouldn’t have been able to experience what it actually feels like to be newly married with each other.

“In Thailand, as soon as the ceremony was done, you go off and you have the pictures and everything just happens, and it flows so great, but you never get to experience just like: ‘We’re married.’ After the legal ceremony, when we were in one of the pubs, we were like, ‘That’s happened, this is real now, we’re actually married.’ “It hits you suddenly but not in a bad way. It’s just being able to sit back and reflect on, ‘OK, so this has just happened to us, and this is how we can enjoy that moment’. Whereas at the ceremony with all your family and friends, it removes that emotion between the two of you, to be able to sit back and be able to fully digest everything that’s happened.”

When you’re being pulled in every which direction and need to speak to every guest, it’s that alone time that couples often regret not prioritising.

“I’m glad that we were able to have the actual day for us because it meant that I didn’t feel that I missed that connection with him on the day. We’d already had that time in secret without anyone else knowing,” Jo agrees. 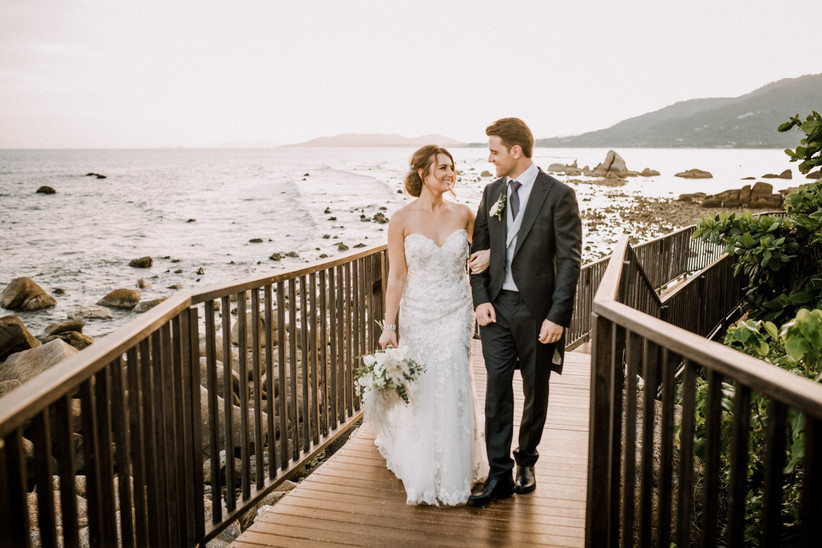 Did it change how they felt at the Thailand wedding, knowing the legal part was out the way?

“It definitely changed it,” says Jo. “It made it, I don’t want to say less emotional because it was still emotional and there was a part during his vows where I knew I was going to cry, but when we were physically walking down the aisle I had no sweaty palms. It made me able to control my emotions a little bit more.”

When we were physically walking down the aisle I had no sweaty palms. Knowing we were already married made me able to control my emotions a little bit more.

None of their friends even had an inkling, it turned out, until Ste was tricked into spilling the beans by Jo’s best friends at the reception.

“I kept thinking I’m going to be in so much trouble because I hadn’t told my mum, I hadn’t told my sisters. Ste explained that they were leading up to it, asking, ‘You haven’t had the legal wedding, have you? Like, this isn’t legal in Australia or the UK?’ And Ste said we’d already done it separately because he thought I’d told them. I feel bad because I still haven’t told my mum,” Jo confesses. 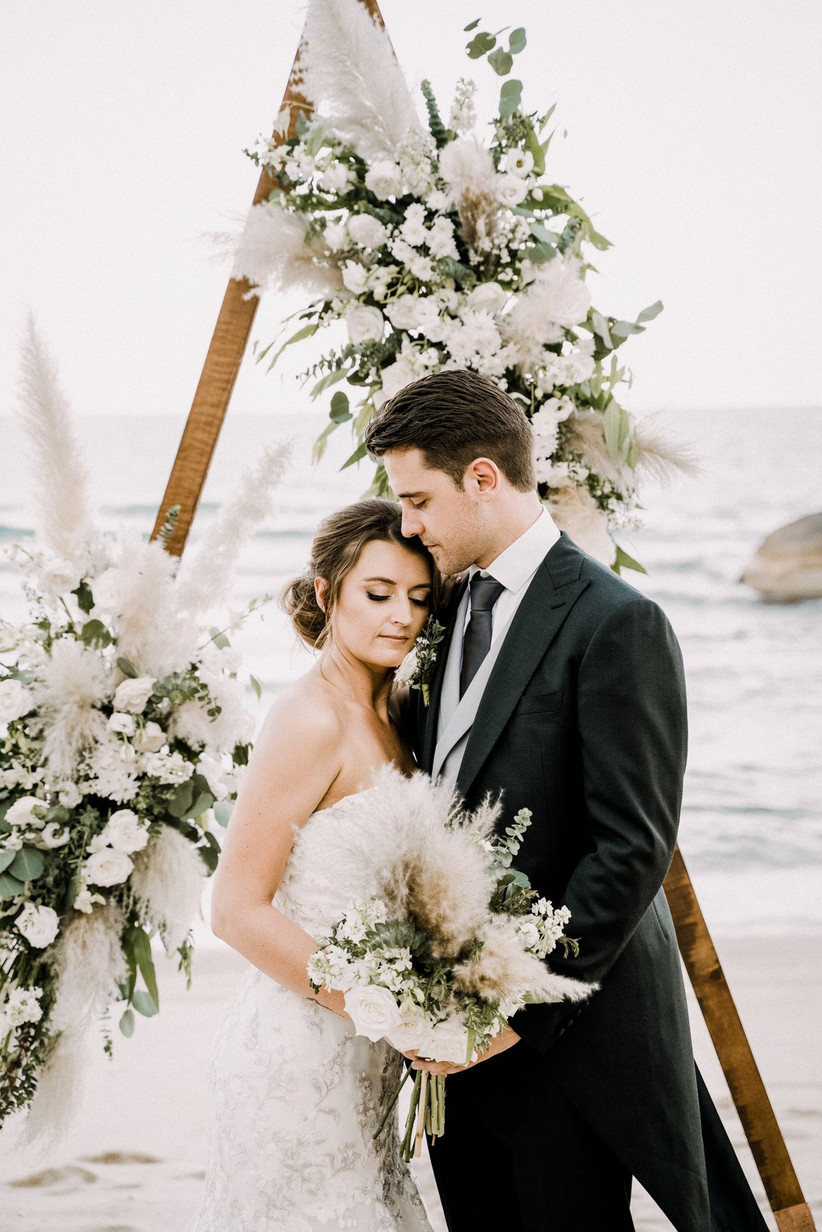 Anyone who has a secret wedding knows the risk is to upset your loved ones when they find out, but Jo and Ste had nothing to worry about.

“My maid of honour was really cool with it. When I offered to tell her all the intricate details about it, she said, ‘No, you just have that day.'”

Truthfully, Jo and Ste found they had so many more important things on their mind at the Thailand wedding as it was the first time their families had ever met.

“The pressure of our families meeting and the pressure of people enjoying themselves was higher than the pressure of the wedding. I guess I wouldn’t recommend a destination wedding unless you have to because it’s a lot on the people that come,” she admits.

It’s a very personal decision for every couple, and one that can’t be taken lightly. When families find out they haven’t been invited it can cause rifts that take a while to heal – although, for the couple, having that special time together can transform their experience of their wedding day. For the strangers that witness it, it’s truly a moment you won’t forget.

One very important thing that comes out of my catch-up with Jo is that even if you tell a pub in Hammersmith you’ve just got secretly married and show them the certificate, they still won’t give you a free drink. If that’s the biggest downside, it’s probably worth at least considering. 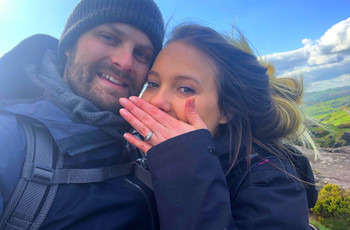 Real Weddings This Is What It’s Like to Get Engaged During Lockdown From cancelled holiday proposal plans to celebrating over FaceTime, getting... 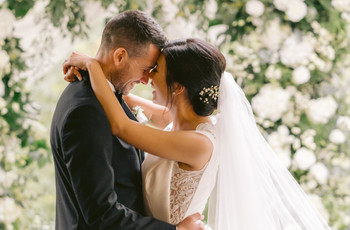 Real Weddings Real Covid Wedding: Jody and Daniel, Fairyhill by Oldwalls Just 17 guests gathered with the bride and groom to celebrate a gorgeous... 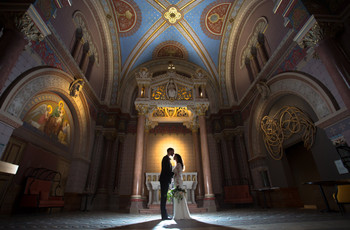 Real Weddings A Chic, Contemporary Destination Wedding in a Stunning... The day began with the bride Ubering to her Town Hall ceremony, before guests... 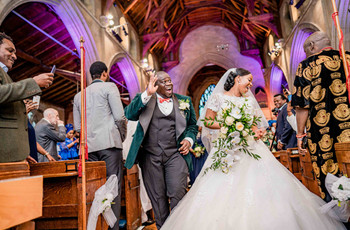 Real Weddings A Music-Filled Wedding at Grand Sapphire Croydon with a Pink... 500 guests joined Adeola and Folayo as they exchanged vows in a church ceremony,...
See More Articles